The English city of Manchester has a long spanning historical development dating back to the Roman period in Britain. The market town of Manchester was a well-established settlement of key regional importance during the Middle Ages, however it was the Industrial Revolution of the seventeen hundreds that really put Manchester on the map and made it one of the industrial and manufacturing powerhouses of the world. At the start of the seventeenth century Manchester was yet to experience its industrial boom. Back then the city had a population of no more than ten thousand people, but by the end of the century Manchester had grown to a settlement of nearly hundred thousand residents. In the opening decades of the nineteenth century industry and prosperity continued, so did population growth – from eighteen o one, to eighteen fifty Manchester’s population quadrupled, reaching four hundred thousand people. Toward the end of the nineteenth century, Manchester had become the second most important and largest city in Great Britain, after the capital London. 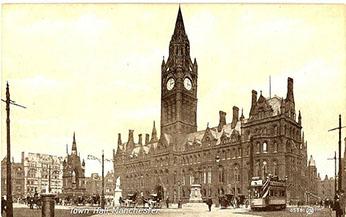 During the eighteen hundreds, Manchester was transformed from a regional market town to what became known as the ‘workshop of the world’. The industrial boom and economic development in the city rested heavily on the cotton industry which was a dominant force for most part of the eighteen hundreds. The cotton mills of Manchester were a source of well-paid employment for many young men, women and families moving from the surrounding country to the city. At that time, children labour was a commonly accepted practice and most of the mills and factories in Manchester did employ children. Although considered a cruel and unacceptable practice today, child workers helped newcomer families reach a better living standard through the extra wages they brought home.
Although income was decent, work at the mills and factories of Manchester was hard and presented former agricultural workers (now factory ones) with new challenges and obstacles to overcome. First of all work at the mills was more intense and fast paced than working the land which is what most people were used to at the time. Factory owners had invested heavily in equipment and machinery and in order to for the operation to turn over profit, work had to be fast and relentless. This aspect of factory work was a real problem for child welfare, as one could imagine. There were also certain natural setbacks to working in the mills and factories such as adverse weather – some mills did not operate in bad weather. Also during the winter months when days were shorter, workdays themselves were also shortened which was reflected in lower wages. In that period, factory owners tried to lure in better qualified and skilled workers through higher wages, but at the same time they were quick to punish and remove any worker who didn’t pull their weight and left the machinery idle.

Manchester’s factories – a foundation for other employment

Indeed Manchester’s strong industrial scene was the main drive and source of employment for locals and newcomers. However the presence and operation of mills and factories helped develop and sustain many other types of industry, creating more diversified employment. For instance, besides workers on the main floor, a factory also needed:

Furthermore, a well-developed and prosperous local industry and its urban worker population also needed steady supplies of goods and amenities like housing and furniture, clothing and footwear, food supply etc. all of which amounted to a busy support section of the economy, working solely for the needs and wants of factory workers. Before the Industrial Revolution, many of the agricultural workers experienced grinding poverty for large parts of the year. The industrialisation of Manchester meant that these people had decent work all year round and were able to provide a much better living standard for their families and themselves.

Heavy industrialisation was a double edged sword and prosperity came at a price. What was the problem? In a nutshell, the problem was inadequate city planning. Like many other towns which experienced rapid industrialisation, Manchester too saw priority of industry over residential amenities such as comfortable housing, good public infrastructure like roads, also recreational amenities like parks, gardens etc. were overlooked. In those days, city planning was in its infancy at best and new worker housing for instance was built with little regards to comfort. 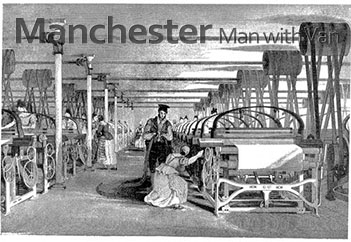 During the nineteenth century there was an attempt to create a viable partnership between the public and private sector concerning services like supply of freshwater, working sewage, rubbish removal etc. all of which were essentials needed by the newly formed worker communities of Manchester. Unfortunately though, private companies tasked with these things were doing a dreadful job, making urban living for workers much harder in terms of creature comforts. The ineffective provision of freshwater, rubbish removal and working sewage eventually resulted in a big drop of public hygiene and health, which brought the cholera outbreak of the eighteen thirties – a dark chapter in the history of industrial Manchester.

Situation saw little improvement for worker communities, and although the cholera outbreak was eventually retained and stamped out, mortality rate especially in infants and children remained high in Manchester for many decades to come. Inadequate city planning meant that many residential communities were left without running water, flushable toilet and working sewage as late as the eighteen nineties. The high mortality rate resulted in Manchester’s constant need for new migrant workers from the surrounding towns and villages.

Manchester may not have been the most pleasant city to live and work in during the Industrial Revolution, but technological achievements and economic prosperity of the age are undeniable and remain one of the pivotal points of British history. The industrial heritage of the city can be seen today in the many preserved factories and plants, many of them transformed into museums. Manchester’s modern economy and industry were built on the foundations laid when the city was indeed ‘the workshop of the world’.

Things to have at home

Starting your own Man and Van service