The Metropolitan Borough of Wigan is one of the larger administrative divisions of Greater Manchester in northwest England, UK. The borough shares a name with its largest component town – Wigan. Population of the Wigan Borough is about 380 thousand people, whereas Wigan town is home to about 90 thousand residents. Including Wigan town, the borough is currently made up of 15 suburbs or villages. The Borough of Wigan is the result of a 1974 merger of several other districts and parishes. Wigan Borough shares a border with City of Salford, and Metropolitan Borough of Bolton.

How the borough was formed and named

Metropolitan Borough of Wigan was officially formed on 1st of April, 1974 (only 2 years after passing the Local Government Act of 1972). The borough amalgamated the former county borough of Wigan itself, and most of the other towns in the County of Lancashire. Some villages from Wigan Rural District were also included in the new borough. Prior to its formal consolidation, the new borough’s name was debated. 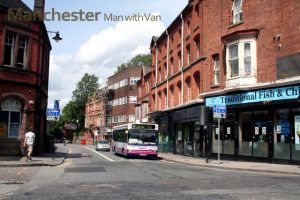 During the administrative proceedings (Redcliffe-Maud Report) surrounding the about-to-be-formed borough, the name Wigan-Leigh was used. Later on, it was suggested the new borough be named Makerfield. However, both suggested names were rejected through a vote (12:2) in favour of the name Wigan. In one of the more recent censuses conducted across the Borough of Wigan, residents were quite divided in their sense of belonging toward Manchester, Wigan itself or the County of Lancashire. This could be due to the large number of districts and settlements merged to form the borough. One of the key regions to form the borough – Lancashire used to be a heavily industrialised region focusing on coal mining and textiles.

Some of the areas that formed Borough of Wigan

The Metropolitan Borough of Wigan was formed through a merger of many former towns, villages and districts (urban and rural). Some of them are:

The Borough of Wigan is the second largest (population wise) administrative division of Greater Manchester after City of Manchester itself. Local population currently stands at about 300 thousand residents, living over 77 square mile area. Oddly, Wigan has twice the national average of permanently sick or disabled residents. Unemployment in the borough matches the national average for England and Wales. Amongst other places of interest in the borough, are Wigan’s seven Nature Reserves. The borough’s (new) coat of arms comprises of various symbols and elements of the emblems of former towns, settlements and regions which formed it. The Metropolitan Borough of Wigan is twinned with its sister town of Angers in France, since 1988.