Oldham and six of its most interesting areas

Oldham is the easternmost Metropolitan Borough of Greater Manchester. It covers an area of 55 square miles and has a population of almost 230.000 people. The borough is named after its largest town, Oldham.

Chadderton lies in the western parts of the borough along the course of the River Irk and the Rochdale Canal. It has an estimate of 35.000 residents and is situated at about one mile from the above mentioned town of Oldham. Chadderton, OL1, is home to several well-known landmarks including Foxdenton Hall. The current mansion is the third incarnation of the building as the first two were demolished. The present edifice dates back to the early 18th century and is considered to be one of the most beautiful Georgian manor houses in Greater Manchester. It is listed as a Grade II* structure and is one of the boroughs most visited places of interest. The area is also the location of several top tier educational facilities and is served by two railway stations.

The area of Block Lane, OL9, is situated on the eastern border of the aforementioned district of Chadderton. Christ Church is beyond any doubt the most famous building in the area. It dates back to the second half of the 19th century and was constructed by a group who were unhappy with the service at St. John’s Church (closed during the early 1980s). Today it is Block Lane’s most recognisable edifice and is the only Grade II structure in the area. One of Oldham’s finest educational facilities, Freehold Community School is located in the district. It sits on the same site where once stood Blackridings Mill which was built in 1861 and demolished during the mid-1970s. Block Lane is connected to the other parts of the borough and Greater Manchester by a number of bus routes which pass through it regularly.

Crossbank is a village which lies in the southern parts of Oldham. The area is mostly residential and is described as one of the calmest and most peaceful in the borough as it isn’t the location of any major landmarks, monuments and buildings which attract both local and foreign visitors. Historians believe that once these lands were owned by the Knights Templar, hence the village’s name. The area shared common boundaries with:

Crossbank, OL4, isn’t served by its own railway station. The nearest rail links are situated in the adjacent districts. 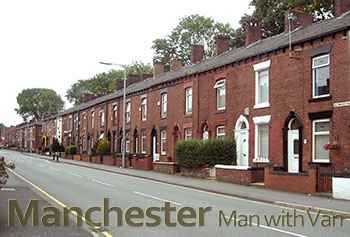 The area of Coalshaw Green, OL9, is another well-known residential district. It is renowned for being the location of Coalshaw Green Park which is one of the oldest green areas in Oldham. The park was created in 1911 and comprises of a formal green area and adjoining playing fields which can be used for the practice of a variety of sports. Coalshaw Green is also home to Emmanuel Church and the Turf Lane Methodist Church. The district is served by the South Chadderton Tram Stop which was established in 2012 and sits on the Exchange Square Line and the East Didsbury Line from the Manchester Metrolink Network.

Saddleworth, OL4, lies in the easternmost parts of the Borough of Oldham and covers an area of 29.4 square miles which is more than a half of the borough’s territory. It is classified as a civil parish and comprises of several hamlets and villages which have a combined population of about 30.000 people. The Obelisk on Alderman’s Hill is arguably the area’s most famous monument. It overlooks the village of Greenfield and provides some of the most astonishing vistas in Greater Manchester. The Saddleworth Viaduct is another well-known local structure which attracts visitors by the number.

The town of Royton lies in the central parts of Oldham and is home to over 20.000 people. The Royton War Memorial is one of the area’s most prominent places of interest. The monument is situated on the summit of Tandle Hill and commemorates the sacrifice of the local men who lost their lives during the events of World War I. The Royton Library and the Royton Town Hall which dates back to 1880 are other well-known landmarks. Throughout the years several notable people have lived in Royton, OL2.

The City of Manchester – the heart of the metropolitan area