At the turn of the twentieth century, Salford’s fire department (City of Salford, metropolitan borough of Greater Manchester) was managed by a pioneer and a courageous fireman by the name of Albert Bentley. Who was he? 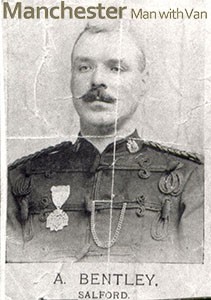 Albert Bentley was one of the pioneers and innovators of firefighting in the late eighteen hundreds. He was known to devise and implement a range of advanced (for their time) firefighting techniques and methods which increased Salford fire department’s success rate when it came to battling and taming dangerous fires. Although we has the department chief and was in charge of the entire administration and day to day work of the fire station, Albert Bentley still went out and fought each fire side by side with his fellow firefighters. His untimely death met Bentley at only forty four, putting an end to his successful career as one of Salford’s best firefighters. He was in charge of Salford’s fire department from eighteen ninety one to nineteen o four.

In recognition of his distinguished career and achievements, and because he basically revolutionised the firefighting service citizens of Salford received, the late Albert Bentley is about to receive the biggest recognition for his achievements – hundred and eleven years after his passing. Recently, Salford local council decided to rename one of the best known and much loved local landmarks in his name. The site in question is Albion Place, just off The Crescent. The square is directly in front of the local fire station, which was also built thanks to the efforts of Chief Albert Bentley, in nineteen o two. From now on, the square is officially known as Albert Bentley Place.

The family of Chief Bentley, particularly his great-grandson Graham Morris have campaigned vigorously over the last five years for the square to be renamed after their distinguished relative. Graham Morris, Chief Bentley’s great-grandson (and one of his biggest fans) said that his great-grandfather was a man of strong principles and he brought military-like discipline to Salford’s fire department – which was also one of the main reasons the station’s success rate. His ingenuity being the other contributing factor.

Chief Bentley was actually the man who introduced the sleeping quarters concept to Salford’s fire station. He ordered the construction of living quarters over the station so that fire crews can literally jump into action immediately and attend to fire emergencies much quicker than before. Chief Bentley though wasn’t satisfied with administering the station alone, in fact he went out to each fire with his men and fought it alongside them. He actually got a number of injuries in doing so, and suffered serious smoke inhalation in one of the fires – though he recovered in full.

Chief Albert Bentley was an innovator and a man of vision. He proved to be much ahead of his time as he was one of the first people ever to implement electrically operated fire extinguishing devices and equipment, both horse mounted and horse drawn.

Moving Abroad? This is What You Should Do