A leading local media in Manchester has staged the city’s first ever environmental awards. This is the first event of its kind to be organised in Greater Manchester, and recognises individuals, groups and organisations which have launched their own green initiatives or have transformed grot spots. 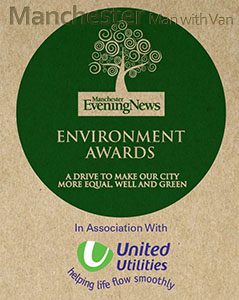 The environmental prizes are awarded in eleven different categories in acknowledgement of those people and organisations which have put in the extra effort in making their lifestyle or business ecofriendly and more sustainable.

The organisers have entered nominations from all walks of life and business, nominees are large and small local businesses, schools, community groups, man and van companies, local groups and charities, special projects etc. As per judges, each entry or nominee has been carefully reviewed and ranked accordingly.

The judging panel has recently completed the assessment of entries, and has compiled the nominee list. The winning entries will be announced in an official ceremony sometime during the first half of October. There are three nominees in each of the eleven categories making up the awards. The event will be hosted by the managing editor of the media organising the event, who also happens to be Deputy Lord Lieutenant of Manchester.

The venue chosen to host the event is the twelve thousand seat AJ Bell Stadium in Irlam, Manchester. Venue managers promised the AJ will provide a unique yet befitting backdrop for the award ceremony thus making it a night to remember.

The Environmental Awards event manager has been delighted with the overwhelming, positive response to the initiative. Businesses and organisations ranging from major regional retailers to local man and van removal companies are standing firmly behind the awards and showing their support.

Local residents and anyone else who is interested in the event, or wants to learn a thing or two about keeping things green is welcome to join in the evening celebrations. Tickets are available at twenty five pounds apiece, and inclusive of a wonderful three course meal.

The eleven categories in which nominees are competing are as follows:

Such events are a great way to stimulated eco awareness. Sustainable business and living will have a direct positive effect on the environment thus preserving it for generations to come. One such event is also a great way for a business, group or organisation to receive exposure and recognition for their green efforts and projects launched throughout the year. Keeping things green is a good idea on many levels, as reducing carbon footprint, resource waste etc. is also likely to reduce the tax burden for many manufacturing businesses. Individuals can also do their bit toward sustainable living through raising their own awareness on a daily basis.

Costs of Moving House in the UK

Removal Tips from the Professionals