Disassembling, moving and then reassembling is one of the two possible ways to relocate entire structures from A to B. The process can be analogised with the packing, shifting and unpacking of valuables during a normal man and property removal. 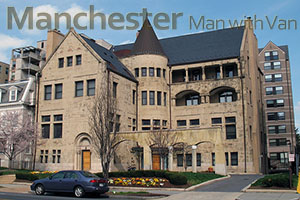 Obviously, moving entire buildings in pieces and then reconstructing them again at their new destination is slightly more elaborate than man and van removals. In many instances, reassembly moves are done not out of necessity, but out sheer vanity and those who have ordered them either pay a top price to make it happen, or become part of history’s epic fails.
One building removal that was indeed necessary was the relocation of the Warder Mansion. The Washington DC building was the only surviving example of architecture by famous US architect H.H. Richardson. The project took place in the nineteen twenties by commission of George Oakley Totten Jr. Now this is where it gets interesting – Mr Totten bought most of the exterior masonry, as well as pretty much the entire interior of the building. By the way, rumour has it that whatever was not bought by Totten was donated to the Smithsonian. Anyway, Totten was keen on moving the building and was willing to do it by any means necessary. The necessary means in this case turned out to be his trusty Ford Model T, in which he meticulously and painstakingly transported the building bit by bit, one and a half miles down the road. Mr Totten rewarded himself for his achievement by repurposing the building as his very own apartment complex.
Another odd, entire building removal took place shortly after the one mentioned above. This time the commissioner was the California newspaper magnate William Randolph Hearst. He was traveling through Spain on a holiday trip and came across an abandoned monastery, built in early tenth century. He purchased the building as a whole, which at the time was abandoned. Next he ordered the disassembly of the structure and attempted to ship it to San Simeon, California. Shipping was going well, until the masonry arrived at the Port of New York where US customs ceased everything and wanted to levy and tax the incoming shipments. Problem was that Mr Hearst was feeling the blows of the Great Depression himself, and his finances were anything but stable and sufficient. In result, the monastery stood in pieces for a good thirty years, when it was finally rebuilt and restored to its original purpose and grandeur.

Tips on how to relocate with a pet