Manchester lies in the western parts of the country and is one of England’s most known cities mainly because of its two extremely famous professional football teams (Manchester United F.C and Manchester City F.C). However the city is also the location of numerous public works of art which the city’s residents and guests can admire while they are wandering the streets of Manchester. 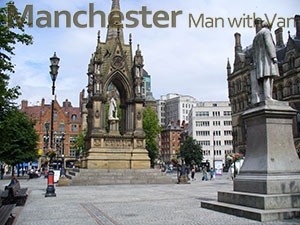 The largest and most famous public art in Manchester is the Albert Memorial. It is situated on Albert Square which is the focal square of the city. The Albert Memorial commemorates the Prince Consort and is the largest monument on the square. The monument comprises of a marble statue of Prince Albert made by British sculptor Matthew Noble. The statue depicts the prince standing on a plinth and facing the west. It is placed within an immense Medieval-style ciborium. The ciborium was created by noted English architect Thomas Worthington who has also built several building in Manchester throughout his career. The memorial is topped with an ornate spire and has crocketed gables on each side. The gables stand on colonettes with canopied pinnacles. Within the canopies stand symbolic figures that represent commerce, art, agriculture and science. Below the figures stand secondary figures which symbolize the Four Arts (painting, architecture, music and sculpture), the Four Continents, the Four Sciences (chemistry, mechanics, mathematics and astronomy) and the Four Seasons. Around the memorial is laid a coloured sett paving which stand for the Four Home Nations (England, Ireland, Whales and Scotland). It is believe that the memorials design is inspired by the Church of Santa Maria della Spina in the Italian city of Pisa.

Another well-known public sculpture is the Alan Turing Memorial, which is located in Sackville Park and depicts Alan Turing sitting on a bench. Alan Turing is considered to be the father of modern computing and is also a gay icon as he was convicted of gross indecency (homosexual acts). This is why it is no coincidence that his memorial is located in close proximity to the University of Manchester and Canal Street, the city’s gay village.

The B of the Bang was another highly popular public work of art in the city of Manchester. The sculpture was situated in close proximity to the City of Manchester Stadium which is one of the city’s main landmarks. With a height of 25 the B of the Bang was one of the tallest structures in the city. The sculpture is made out of metal and stood at its site from 2005 to 2009. In 2009 the sculpture was dismounted and is currently kept in storage.

As you can see the city of Manchester has indeed numerous interesting things that you can see once your move to the city is completed. To make your relocation even easier, don’t be shy to use man and van services. Manchester is home to some of the finest man and van companies in the country.

Not assume wrongly that these are the only public arts in the city. Manchester is full of memorials, sculptures and other interesting places, so it is up to you to visit them.

Major European Cities and Their Most Famous Landmarks