When you are moving to Manchester, there is a lot more to know about the city than just which man and van company it is best to use in order to carry out the relocation. The thing is that you have to be acquainted with the past and present of your new home, and what it is significant for, because let’s face it – the cultural and social landscape of the place you are moving in to will determine your future. 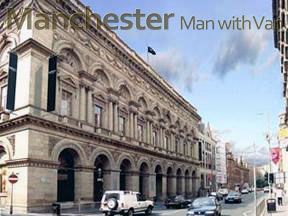 When it comes to Manchester, you should know that this is one of the leading centers of popular music in UK. You might have thought that this was Liverpool, but the truth is that Manchester can beat it any day. Ever since the 1960s there has been a continuous tradition of artists emerging from the city who would have great impact not only on the music scene of Britain but also the world. Let’s take a look at several names of bands that are connected to Manchester from that period and you will see what we are talking about. Hailing from Manchester are the Bee Gees, The Hollies, Herman’s Hermit and so one and so forth. Any other those names ring a bell? We thought so. Just a simple fact – in 1965 Herman’s Hermit were so popular that they have actually outsold The Beatles several times, with 10 million copies of their albums being bought by music fans in just 7 months. But the 60s were only the beginning.

The 70s brought popular music in a whole new direction. That was the time when punk rock emerged. And who were the kings of punk at that time? That’s right, The Sex Pistols, who are yet another cult-status band that began their career in Manchester. They played their first concert in Lesser Free Trade Hall in front of mere 42 people, but the venue was to become one of the leading music spots in the country in the years to come, again thanks to artists and bands closely related to the city. Actually, among the 42 attendees of the Sex Pistols gig were Tony Wilson (creator of Factory Records), Peter Hook from Joy Division, Morrissey, and a constellation of future producers, music journalists and so on. It is safe to say that one of Sex Pistols smallest gigs in history was the most influential one. And it happened in Manchester.

In the 80s Factory Records, based here, gave a push forward to yet another genre that was to change pop-music of Britain – post punk, by releasing the debut of Joy Division. But the group that was to become the cult Manchester band of the generation was no other but The Smiths, led by Morrissey.

Oasis, Take That, Simply Red, Oceansize are only a few of the names that defined the local music scene in the decade to come. Even today the music scene is thriving and stronger than always. When you come to the city, make sure to check out the schedule of the Manchester Evening News Arena, you will definitely find something to your liking.