The Big Hole in Mancunian Way 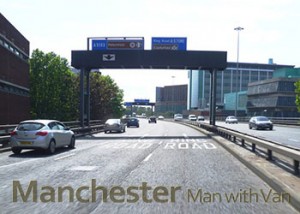 If your man and van removal route goes through Mancunian Way, then perhaps it is best to reschedule or find another way as the major road artery serving large areas of Manchester is offline since last Friday when a forty feet section of the road surface gave way and collapsed over what is believed to be a previously unknown Victorian era culvert. Work on the collapsed section of road on Mancunian Way is due to begin shortly but engineers are still not sure where to begin with it all. Initial survey using special cameras which were lowered down into the gaping hole over the weekend have indicated an intricate network of pipes and cables, under which is the now blocked culvert pipe. One of the problems faced by engineers right now is the unstable ground around and inside the actual hole.

The whole occurrence seems to be the result of a bad set of circumstances made even worse by end of last week’s heavy rain. Engineers believe that a modern day drainage pipe has been leaking for months, soaking the ground below that particular section of road. The now aging Victorian era culvert ended up being surrounded by saturated earth which no longer supported the culvert itself as well as the weight of the road section above. It was just a matter of time (or rainy weather) before the hole in the road opened. Another issue faced by engineers who are now organising the repair works is the old culvert which is most likely still pouring water in the exposed layers of earth around it, thus making the ground around the hole even soggier and more unstable by the hour. This hampers efforts to bring in heavy machinery into the hole as sides and bottom could be prone to collapse.

The visual equipment brought in to inspect the interior of the hole and the layout of pipework and cabling should give a good indication of how bad things really are, and what is the right way to deal with the situation.  At the moment, city authorities cannot pinpoint how long exactly repairs will take, but it is projected that worst case scenario is about five weeks at least. If things prove more difficult Mancunian Way will remain closed, both directions, for at least two months. Ensuring the site is safe to operate is not a lengthy process, but it too is expected to take about a ten days to a fortnight.

Adequate signage and road detours will be put in place by local authorities, who also advise drivers to seek alternate routes unless absolutely necessary to use Mancunian Way, if so they need to be patient as journey times will take longer than usual. The actual repair process will require backfilling the hole in order to stabilise the exposed layers of ground, then placing metal supports to form a solid frame inside the cavity, and then finally using the services of specialised miners/underground engineers who will repair the culvert, before being able to fix the road section on top.

Inside the Mechanics of Piccadilly Gardens Fountain