Manchester is one of England’s largest and most populous cities. It is also the location of numerous landmarks that attract visitors from the four corners of the world and one of them is the Manchester Arena. 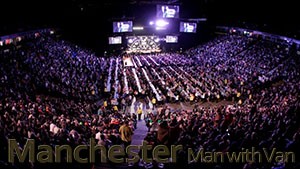 The arena is situated in Hunts Banks in close proximity to the city centre. It was designed by architects Austin-Smith Lord, Ellerbe Becket and DLA Design. The construction began on March 1993 and ended 27 months later on the 15th of July, 1995. The total construction costs were £52 million.

The Manchester Arena has a capacity of 21.000 spectators. This makes it the indoor venue with the highest seating capacity in the United Kingdom and the sixth largest indoor arena in Europe (Palau Sant Jordi in Barcelona being the largest with a capacity of 25.000 seats). It is also one of the busiest indoor venues in the world.

The lower tier of the arena has a fixed seated capacity of 10.762, while the upper tier – 8.870. Due to the fact that the Manchester Arena is classified as a multi-purpose venue (it can host both entertainment and sporting event) its capacity can vary in dependence of the hosted event. For instance the maximum capacity of an ice hockey event is 17.643 people while during a basketball game the capacity of the venue can be extended to 20.500 people. During musical concerts the fully seated capacity is 20.400 people (21.000 with floor standing spectators).

The city of Manchester has used the arena as a focal piece in their bids to host the 1996 and 2000 Summer Olympic Games. However both times they were unsuccessful and to this date the Manchester Arena has never hosted any Olympic events. Still in 2002 the arena was one of the numerous locations throughout the city that hosted the 2002 Commonwealth Games.

The latest major musical concerts that were held in there were Rihanna’s Diamond World Tour, Katy Perry’s Prismatic World Tour, Jay Z’s Magna Carter World Tour and One Direction’s Take Me Home Tour. The area was the last venue of host a Whitney Houston concert. The two shows were part of the Houston’s 2010 Nothing But Love World Tour.

As you can see Manchester has plenty to offer to its residents and visitors in terms of entertainment. So make sure that you attend at least at one of the numerous events that area held at the arena once that you have moved to the city.

Have no worries about your relocation as Manchester is home to some of England’s finest man and van companies. This means that you won’t have a hard time finding a reliable and highly capable moving team that can help you with your removal. However don’t make the common mistake of hiring the first company that you find. Instead scout several moving firms and hire the one that offers you the best man and van services at the most reasonable prices.

You can check on the events that are about to be hosted in the area on the arena’s website.