Manchester is one of England’s largest cities and is the home of some of Britain’s finest libraries. This is why we have decided to write down and article about three of Manchester’s most beautiful libraries. 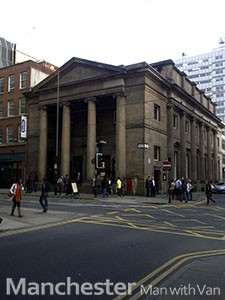 The Portico Library lies on Mosley Street and is classified as a subscription library. The edifice of the library is designed in the Greek revival style and was built during the first years of the 19th century (1802-1806). The building was designed by architected Thomas Harrison who also designed the Lyceum in Liverpool and is often considered to be his best work. The collection of the library is mostly focused on 19th century literature but works from other eras can also be found. The Portico Library is listed as a Grade II building.

This library is beyond any doubt the most famous one in the city. The Manchester Central Library is the headquarters of the city’s library and information service. The library is situated in close proximity to St. Peter’s Square which is arguably the most notable square of Manchester. The building that houses the library was designed by E. Vincent Harris in the neoclassical rotunda, Tuscan colonnade style. The construction of the edifice started in 1930 and ended four years later in 1934. The design of the edifice was met with acclaim and praise by the architectural critics upon the library’s opening. From 2010 to 2014 the library was closed as it was the subject of a major renovation project. The Manchester Central Library is one of England’s most visited libraries with approximately 10.000 visits per day. The building is listed as a Grade II structure.

The Rylands Library is housed in a late-Victorian neo-Gothic edifice on Deansgate which is one of the city’s main roads. The library was founded by Enriqueta Augustina Rylands in the memory of her husband, John Rylands. The construction of the library took almost ten years as it began in 1890 and ended in 1899. The Rylands Library was officially opened to the public one year later in 1900. In 1972, the library was amalgamated with the library of the University of Manchester and was renamed to John Rylands University Library of Manchester. The library has one of the largest special collections in the United Kingdom that includes numerous medieval illuminated manuscripts, a Gutenberg Bible, the second largest collection of printing by William Caxton, and the most complete collection of the editions of the Aldine Press of Venice and many more rare volumes.

As one can see the city of Manchester has plenty of libraries that can satisfy the reading needs of anybody. The city is also home to some of the finest man and van companies. So if one is about to move to, from or across the city, he/she shouldn’t worry about finding high-quality man and van services.

Please note that these are not all the libraries in the city, so even if you cannot find the books that you are looking for in the aforementioned libraries, make sure to seek them in other libraries of the city.